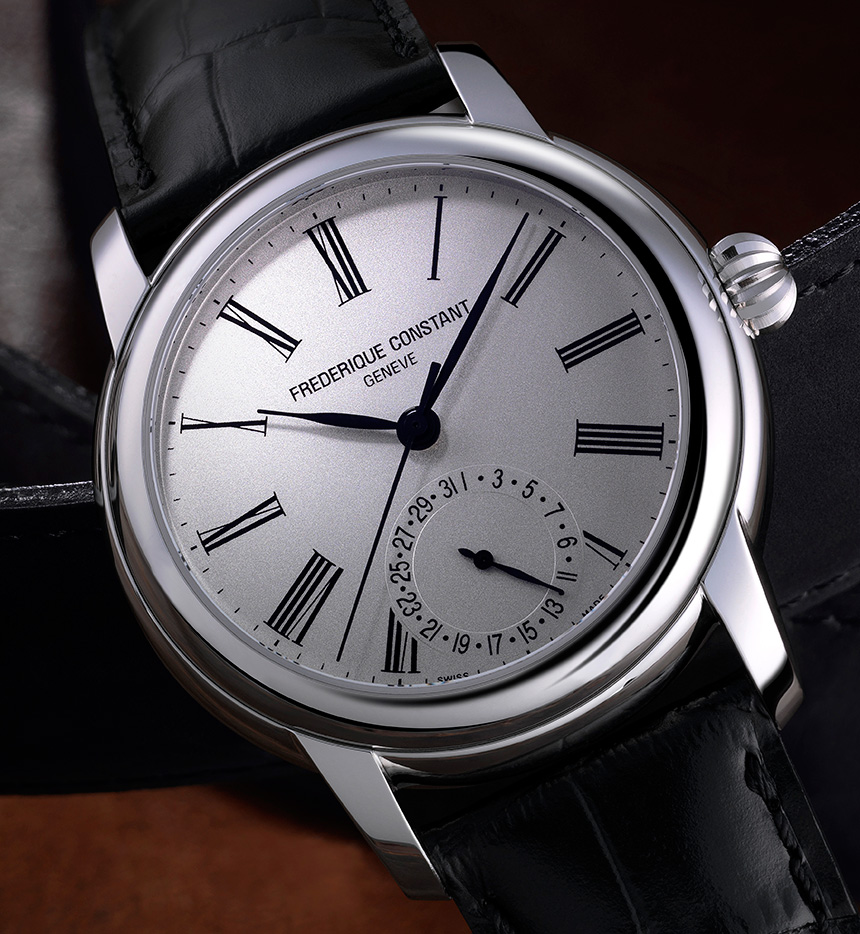 Generally speaking, when it comes to affordable in-house-manufactured movements, there’s a marked dearth of options between the most obvious players, like Seiko and Rolex – both of whom largely exist far apart on the budget spectrum. But for those in the know, Frederique Constant is an notable option – particularly with the latest updates to its affordable Swiss-made Classic Manufacture collection, beautifully rendered and powered by the brand’s very own FC-710 automatic movement. 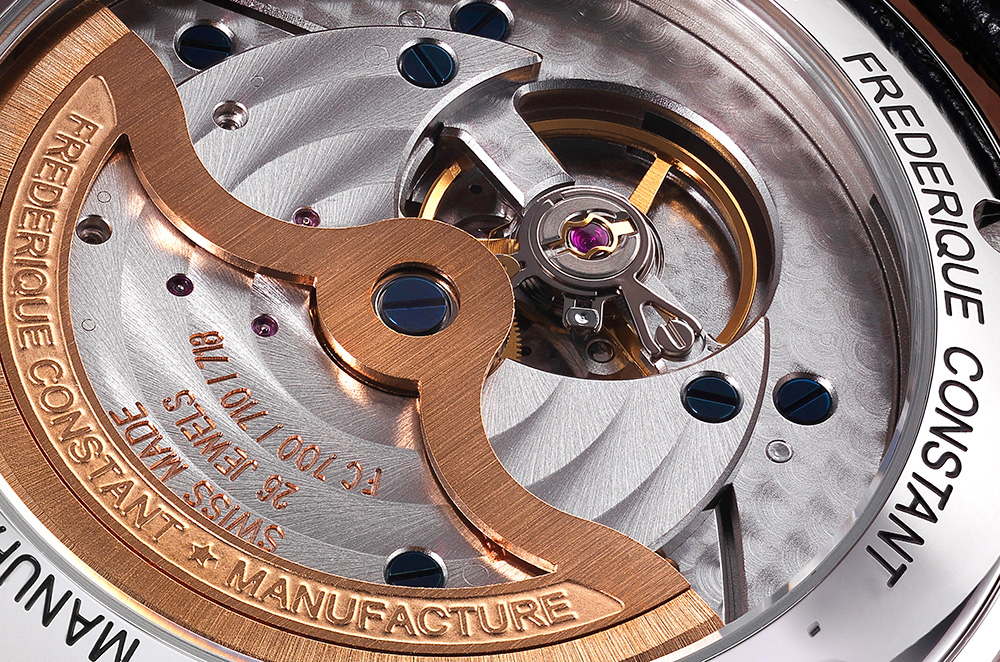 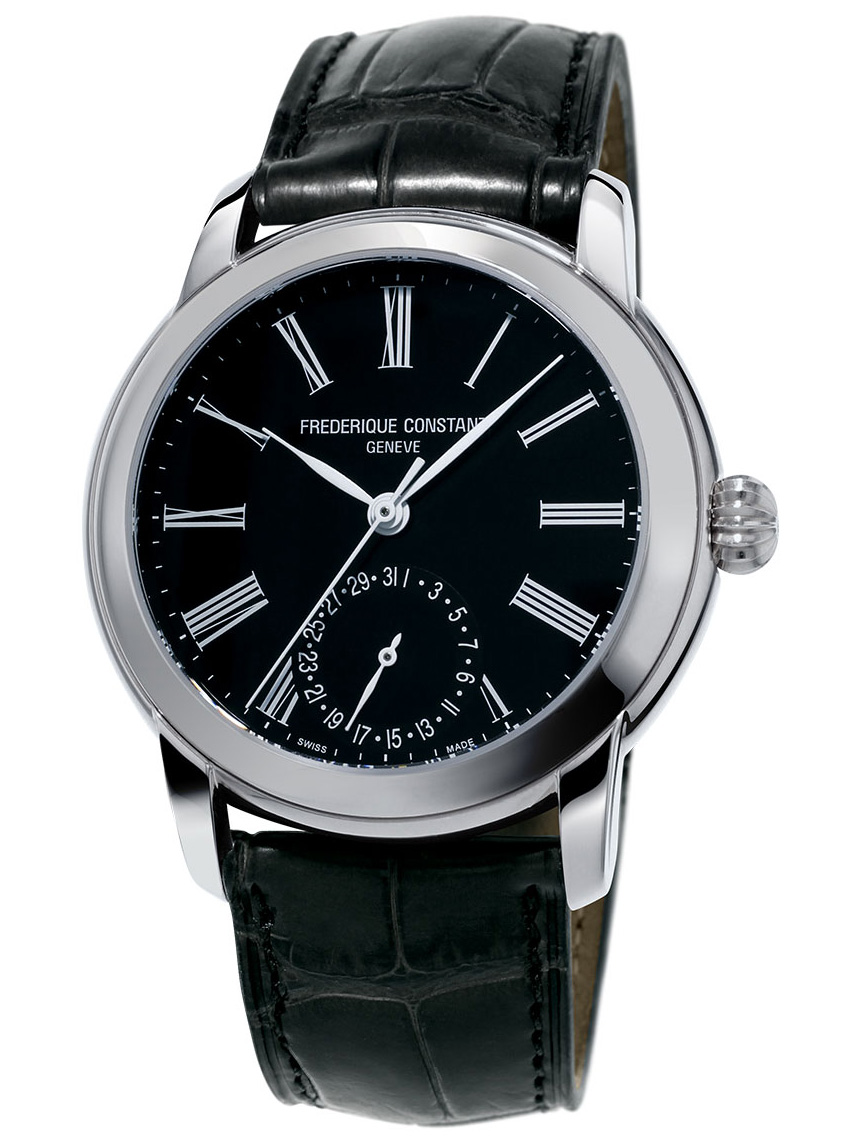 Frederique Constant has been in the movement manufacture business since 2004, but we’d argue they only started to fully capitalize on that production potential with the brand’s second base caliber – the more accessible FC-700 automatic series, introduced nearly a full decade later. Unlike the brand’s first open heart Calibre FC-910, the 700 series was a caliber that would ultimately pave the way for a wider range of entry-level applications for the brand. There are a few module variants within this caliber family, like moon phase and worldtimer options, but the Frederique Constant Classic Manufacture is a traditional 3-handed automatic, characterized by a 42-hour power reserve and 6:00 date aperture – a replica watch that left us considerably impressed with its value proposition when we first reviewed it in 2014. 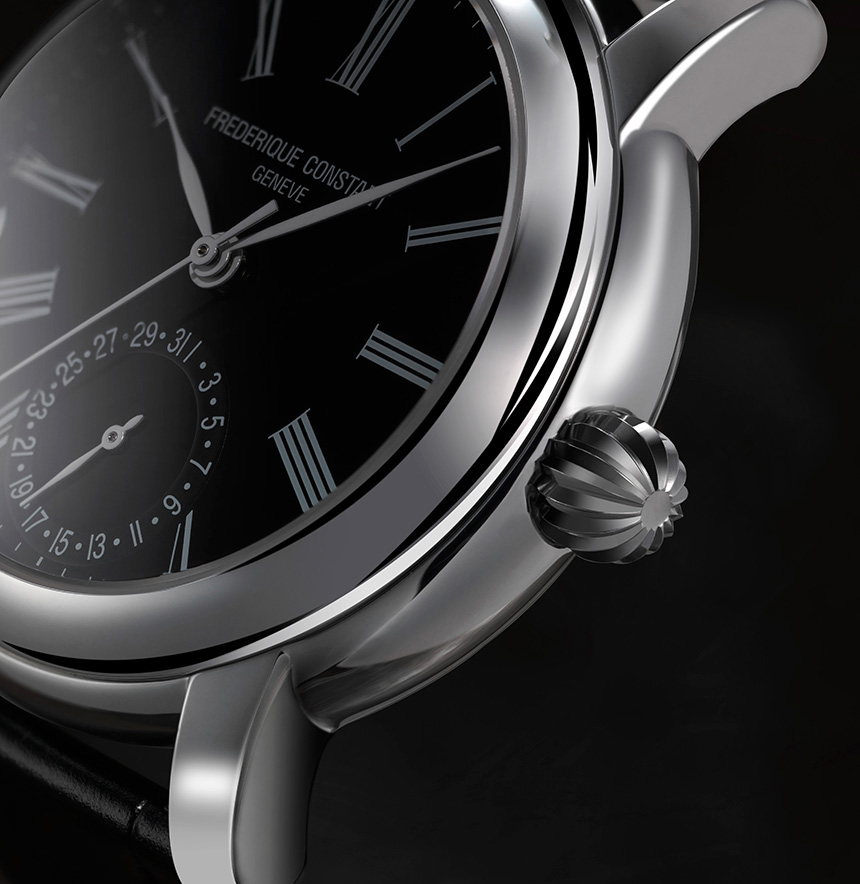 As good as the Classic Manufacture was the last time we saw it, I think that its aesthetic updates for 2016 are definitely welcome. And while the replica watch still utilizes the same curvaceous 42mm stainless steel case and signature onion-shaped crown, gone are the textured dial elements like the hobnail guilloché, along with the overly bold Roman numerals, in favor of a thin, minimalist typeset. Also gone are the blued pomme-style hands, which have been replaced with a more traditional needle-shaped handset that nicely complements the date indicator at 6:00. The end result feels specifically vintage art-deco, more toned-down, more versatile, and comfortable in its own skin – unlike the previous iteration which felt like it was trying a little too hard to be a poor man’s Breguet. Better still, is how the changes feel subtle enough that they don’t entirely compromise the DNA of the replica watch itself, but at the same time, they lend the Frederique Constant Classic Manufacture an identity that feels a little more its own. 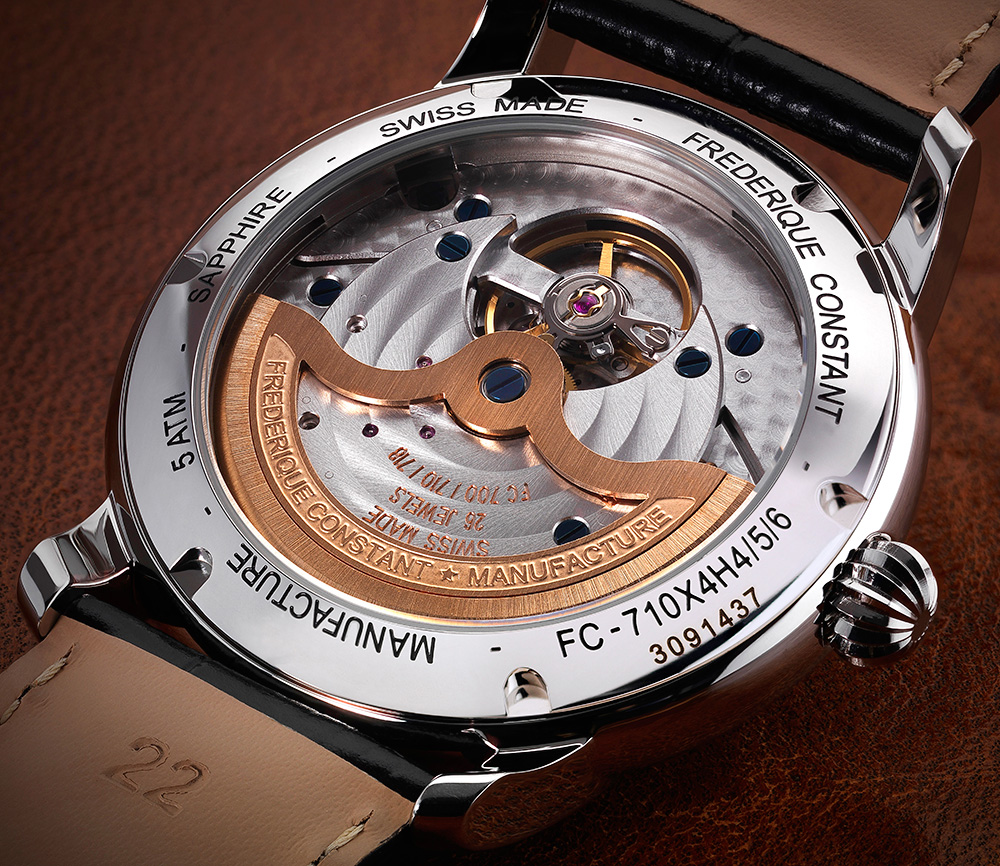 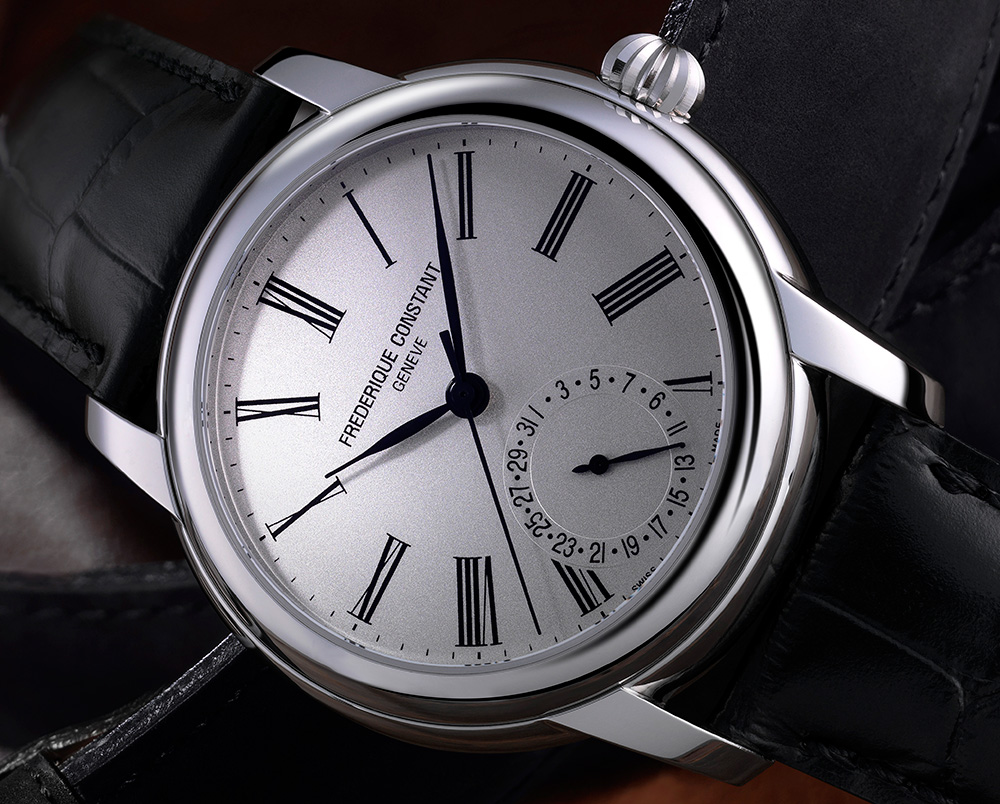 Flip the Frederique Constant Classic Manufacture over and you’re presented with the same view as the outgoing model: the nicely decorated FC-710 humming away at 28,800vph with its blued screws and Côtes de Genève stripes, all proudly visible through the sapphire caseback. It’s not the perlage that impresses, though, it’s the fact that both manufacture and finishing are done in-house by Frederique Constant – and at a fraction of the retail price of the next tier of Swiss-made in-house options. 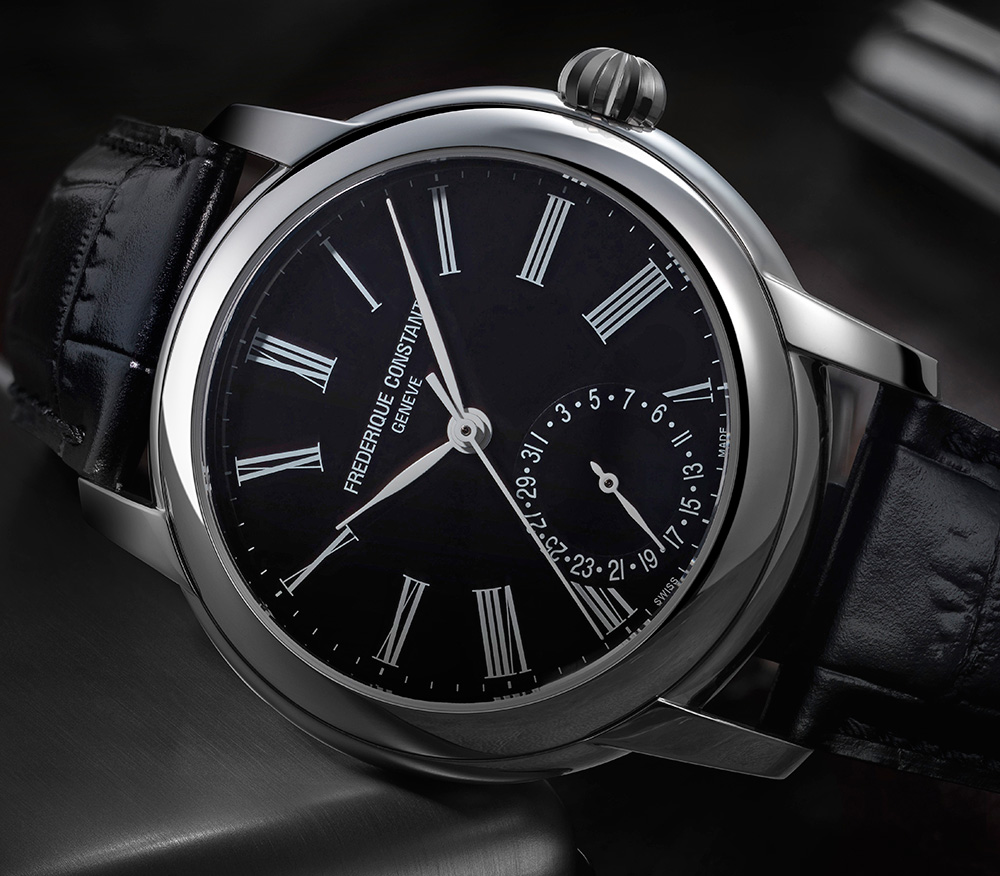 With a flag firmly planted in the sand as one of the market’s most compelling Swiss-made value propositions (no better example than the brand’s impressive sub-$10k perpetual calendar introduced earlier this year), Frederique Constant continues to do what it does best with the latest iteration of the Frederique Constant Classics Manufacture. Those interested will be able to choose from either black (FC-710MB4H6) or silver (FC-710MS4H6) dials, each with a price of $2,495. frederiqueconstant.com